Fall Newsletter / We are standing at the threshold of a new decade. 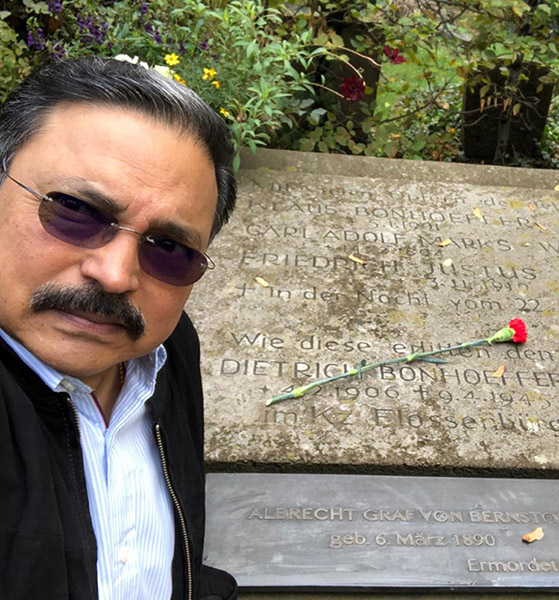 Sam Stephens beside Bonhoeffer’s grave. He rededicated his life for the cause of the King & Kingdom—Achieve 2040

We are standing at the threshold of a new decade.

I vividly recall this time of the year twenty years ago when we were gearing up to enter a new millennium. People’s excitement was also coupled with the possible Y2K glitch and fear over the millennium bug. Mission agencies and Christian organizations formed networks and movements such as DAWN 2000, Finishing the Task (FTT) and several others were birthed with a fresh impetus on fulfilling the Great Commission. At that time IGL was well over seven years into its Vision 2000 church planting movement with more than 12,000 churches planted in unreached villages since 1992. The NAIC was formed in 1996 with over 6,000 active member churches. The WWM launched in 1998 had an active enrollment of more than 7,000 committed volunteers and an equal number of young people enrolled and trained through NAIC’s youth wing, Y21. While many others were in their planning stages, IGL was already in the midst of a strategic plan that was working and bringing in a great harvest. Long before church planting movements and disciple-making movements were conceptualized and clichéd as they are now, God embedded those seeds into the hearts of IGL’s leadership. I say this not with pride but with a deep sense of humility that God had chosen us to pioneer—that which IGL has always sought to be!

With all that God had accomplished through us, we entered the year 2000 with a well laid out plan, including objectives and specific goals for the next ten years. We called it IGL’s ‘Decadal Goals’. Through the fervent prayers and support of many IGL partners, by the end of 10 years most of what was prayerfully envisioned was fulfilled. In fact some of the goals for church planting and leadership development were exceeded. IGL’s ‘Second Decadal Goals’ were established and initiated in 2009.

Once again we are standing at another defining moment.

The social and political conditions are much different now. Evangelism per se in terms of proclamation is not as easy as it used to be. A majority government that is totally opposed to Christianity is aggressively promoting Hindu fundamentalism. The government’s new policies and legislations are designed to control Christian organizations and pose a great threat to freedom of religion and a challenge to traditional methods of evangelism and church multiplication. What is different with IGL now is that it stands stronger with over 100 K churches and an army of men, women, youth and children equipped to fulfill the Great Commission and further the Kingdom. We stand with greater confidence in God’s faithfulness, having experienced His powerful and miraculous hand upon us all these past years.

As I write today, my heart beats with the same excitement…

if not more, as it did two decades ago. As we look at the third decade of this millennium and the Kingdom task that lies ahead I am excited about the opportunities.  What about present challenges?  Well, they will always be there in some way or another. In the midst of all the changes and challenges, I wish to highlight two things that have not changed. First the receptivity of the unreached people to the Gospel. India still remains vastly untouched and unreached. People living in more than 300 thousand outlying villages are without a Christian witness. They are waiting for the Message and receive it with open hearts when it is shared in inappropriate ways and through indigenous witness. Our Sovereign God is working and drawing people to Himself in His sovereign way. Secondly, IGL has not changed its course and strategy that was set two decades ago. What is it? Multiplying “Life-giving and (self) reproducing” churches. In other words, every local church reproduces itself in a cluster of neighboring villages through its members who are trained and equipped to witness and disciple others. We will still lead with the Gospel through a careful but effective witness of believers and continue to plant churches in unreached rural villages. We will continue to equip every local church for community transformation.

I am anxious to share with you a vision
that I believe God is calling us to, as we
step into the next decade…

This vision is God-sized and may sound incredible from a human perspective but definitely attainable from a Kingdom standpoint. It is a vision of a life-giving and reproducing church in every village of India by 2040! It is a vision that can significantly touch and transform the rural populace of India. It is a vision that will create channels to plant the values of the Kingdom in communities and nourish those values.  It is a vision that ensures the fulfillment of the Great Commission in the second-largest nation of the world that has remained least touched and reached, a nation still in bondage waiting for the Good News of liberation and transformation.
I invite you to join us in prayer and support to make this vision a reality.